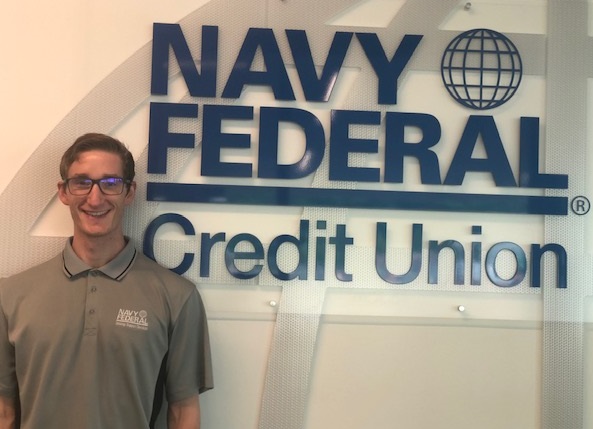 A former caterer is cooking up a new career in cybersecurity thanks to Laurel Ridge.

After graduating from Handley High School in 2012, D.J. Joachim spent a year living and working in Germany. Part of the time was spent repairing pianos.

When Joachim returned to the U.S., he and a business partner had a catering service. After a couple years, he began running his own catering company.

He first started cooking when he was 15, to help his single mother and siblings.

“That was the easiest work to get – there’s always a job open in a restaurant,” Joachim said. “But, my passion has always been technology. Plus, standing on your feet for 14 hours a day like you do when doing restaurant work, it catches up with you. I realized I’m able to do it now because I’m young, but I don’t really feel like I’m being challenged mentally.”

He remembered Laurel Ridge coming to visit his high school. It was his most affordable option for getting the education he needed for a career in technology. Joachim enrolled at the college in 2017, and will graduate with his associate degree in cybersecurity in December.

Laurel Ridge’s program has been designated a National Center of Academic Excellence in Cyber Defense Two-Year Education by the U.S. Department of Homeland Security and the National Security Agency.

Joachim hopes to earn a scholarship that would enable him to transfer to George Mason University to continue his cybersecurity studies after graduating from Lord Fairfax, or possibly continue his studies through a German university, which would allow him to study tuition-free.

Joachim has worked at Navy Federal Credit Union for the past year. He really enjoys his job working in desktop support services, supporting critical infrastructure.

“They couldn’t be more flexible for students,” he said. “When I was hired, I told them I really wanted to prioritize my education, and that was a selling point for them.

“They’re fantastic. They really, really are a great company and take care of their workers. They give back to everybody.”

Joachim also keeps busy by serving as one of Lord Fairfax’s student ambassadors, and being on the cyber team. During the National Cyber League Competition this year, he placed in the top 3 percent of 5,600 competitors. His team was in the top 17 percent of 925 teams.

“There are four parts to the competition: practice round, pre-season, individual competition, and then finally the team competition,” Joachim said. “Each part consists of 72 hours of straight hacking – like a cyber marathon – for the team that can score the most points by solving security challenges.”

He credits his Laurel Ridge professors with helping him succeed.

“If it wasn’t for IT Professor Henry Coffman and Computer Science Professor Melissa Stange, I wouldn’t be where I am today,” Joachim said. “Dr. Coffman is the one who introduced me to the competition. He would push me all the time in his classes to try harder and do better, and gave me resources outside of class.”

He described Dr. Stange’s teaching style as unique and challenging.

“Because of taking her classes, I feel so comfortable where I am with the technology I’m using,” he said. “She has had an enormously positive impact on my education.”

Are you inspired by Joachim’s story? Would you like to help other students like him? Please consider making a gift to the Laurel Ridge Educational Foundation at laurelridge.edu/donate.