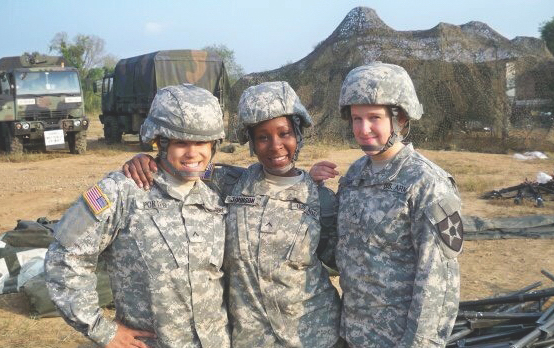 2005 Strasburg High School graduate Tamika Fischer is a mom, a veteran, an employee, and – come next spring – will be a college graduate.

Fischer will be the first of her brothers and sisters to obtain an associate degree. After receiving her degree in general studies with a specialization in the administration of justice, she plans to obtain her bachelor’s degree in either criminology or criminal justice from Arizona State University Online.

She initially started at Laurel Ridge in 2011, but took a break, coming back in earnest last year.

She hopes to either work in victim advocacy or probation and parole, where she can help steer troubled people into becoming productive members of society.

Several years after graduating from high school, Fischer enrolled in the U.S. Army. Soon, she was stationed in South Korea. She worked as a cook, so she had “long, long hours,” but she enjoyed her time in Asia. Fischer was later transferred to Ft. Drum, N.Y., before returning to Strasburg as a civilian.

Fischer is using her military benefits to finance her degree. Her employer, Starbucks, will pay for her to attend ASU Online, she says.

Besides working and attending college at Laurel Ridge’s Middletown Campus, Fischer is busy raising her daughters, Jada Fischer, 11, and Jayleh Porter, 7, and son, Eli Fischer, 16 months. Eli was recently diagnosed with diabetes, which is “life changing.”

“Life is definitely busy, and chaotic,” Fischer says with a laugh.

A friend who visited her at home asked how she could study with all that is going on in her life.

Laurel Ridge’s small class sizes were one of the initial draws for Fischer. And, she admires her professors, particularly Assistant Sociology Professor Larry Friedenberg.

“I told him that with three kids, I didn’t know if I’m going to be able to do this,” Fischer says. “He said, ‘You can do this. If you need extra help, just come to me.’ A lot of my professors have been like that.”

She recently made her first trip to the Tutoring Center, a free service offered to Laurel Ridge students, and received help with a paper.

“I think that’s pretty cool,” says Fischer, who has been spreading the word about the center to her classmates.

She is looking forward to her future and a career of helping others.

“If more people try to impact others by helping them, maybe we can change the world,” Fischer says. “I don’t have a lot, but I always try to give.”